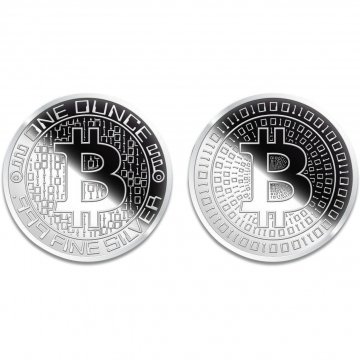 This coin was originally designed by Mick Bruce of MJBMonetaryMetals in 2011.

Mick created the first Silver Bitcoin themed coins with 1 gram of silver, but this project never made it any further than the drawing board.

If you are trying to determine which design should be used for a traditional silver ingot coin, the choice seemed obvious.

“I’ve been a silver coin collector for some time. One thing that has bothered me about Bitcoin is the lack of traditional silver options. Most Bitcoin themed coins highlight logos from their manufacturer or are intended to be used as bitcoin wallets. I wanted to create something more pure that could be updated annually and fill the role of a traditional style coin like an American eagle or a Chinese panda for the Bitcoin community. ”

Binary code of the coin with meaning

The binary code on the back of this coin is almost completely part of the encrypted messages. For example, the binary message encodes the outside of the coin for: 2017oz.

Ask your own question

No questions about the product available yet