BC Vault One
Review and Comments 2021 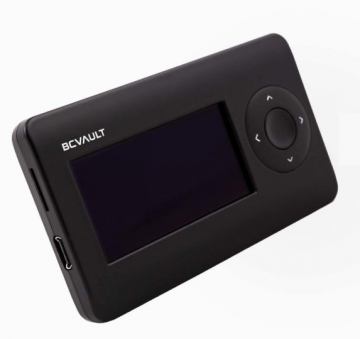 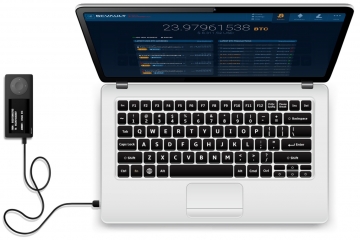 Buy BC Vault One

Like most hardware wallets, the BC Vault is primarily available online. In the official BC Vault Online Shop, the device currently costs 159,99 € (click here to check the current price). The shipping takes place worldwide, whereby this is still connected with additional costs.

There are also many official resellers who sell the hardware wallet .

Important note on the purchase of hardware wallets

Hardware Wallets should preferably be ordered directly from the manufacturer or official resellers.

Dubious shops or private sellers on platforms like ebay or amazon could manipulate the devices for their own purposes or trick the buyer. This way the thieves can steal all coins from your hardware wallet at a later date. Unfortunately there have been such cases in the past

What’s in the box? 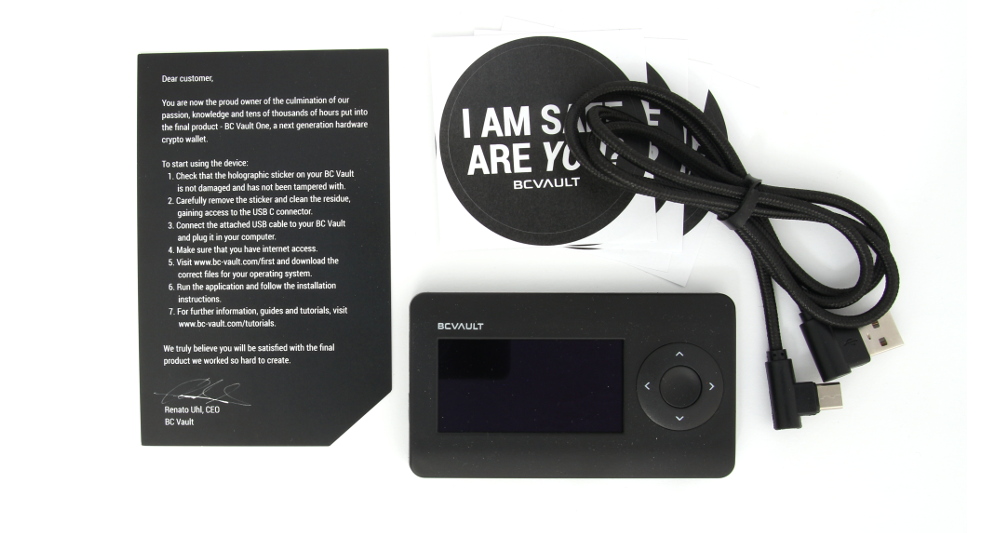 The device is 100x57x10mm tall and weighs 42 grams. At 55×27.5mm, the OLED display is rather large among the hardware wallet and has a resolution of 128×64 pixels. Next to the display are the D-Pad for navigating and selecting. On the left is the slot for a microSD card and the USB-C connector.

Setting up the BC Vault One

Never use a hardware wallet that is already set up. You must choose your own PIN code or password and perform the backup yourself. This is not given by anyone!

The quick start guide reveals how to set up the hardware wallet. First, the seal at the USB-C port must be removed and then the device must be connected to the computer with the supplied cable. Now you shake the BC Vault to initialize and secure the random number generator.

The software can then be downloaded from www.bc-vault.com/first and be installed. After installation and execution, a login screen will appear. If it doesn’t happen automatically, you can first log in here with an empty password. Finally, you are asked to set a global password for the software as well as a global PIN for the device. The latter is a combination of the four directional buttons, for example UP, DOWN, LEFT, LEFT.

If you forget the global password or PIN, the BC Vault is useless and all cryptocurrencies are not accessible cryptocurrencies . So be careful to remember them or write them down and keep them in a safe place!

The device is now ready to be set up and ready for use. Unlike other hardware wallets, the BC Vault does not work with hierarchical deterministic wallets and thus generates a new backup for each account created.

Handling the BC Vault

In order to work with the hardware wallet now, new wallets can be created via the software.

All cryptocurrencies can be used at the same time at any time, no apps need to be installed.

Once a new wallet has been created, it is advisable to create a new backup. This can be spent using the settings on the SD card or by QR code.

Currently, the hardware wallet can only be used with a computer. However, a smartphone integration is already planned. The following platforms are currently supported:

The BC Vault supports the following cryptocurrencies:

The BC Vault is limited to help articles and e-mail support. Phone support is not currently available.

Safety aspects of the BC Vault 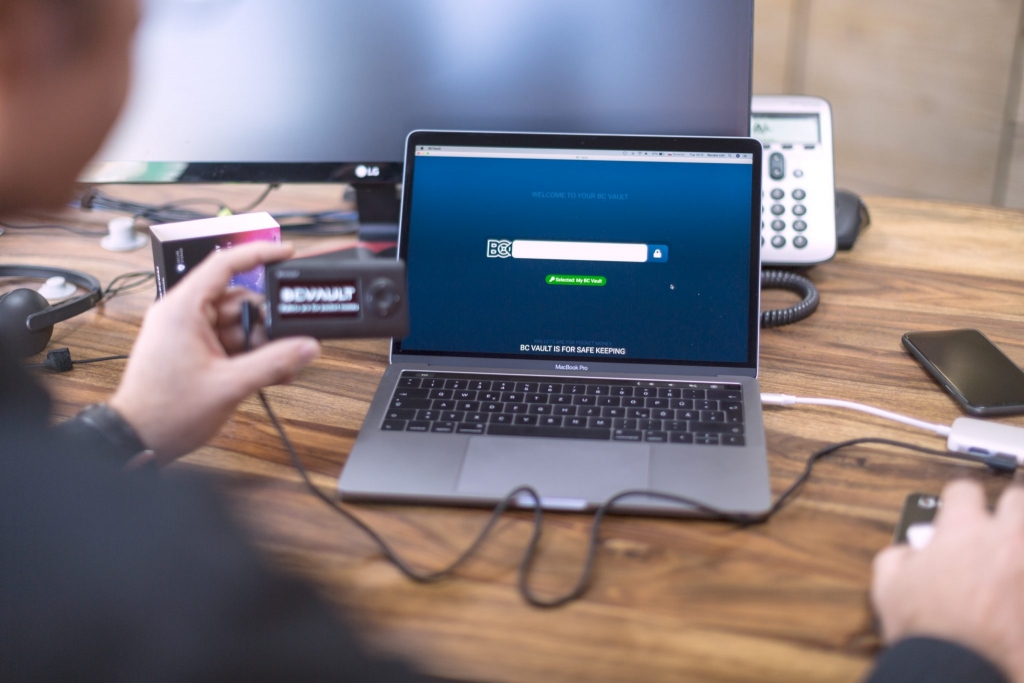 Each wallet on the BC Vault is encrypted individually with a combination of a password entered on the computer and a PIN entered through the BC Vault. In addition, a global PIN and password that give your BC Vault an extra layer of security further protects the device. This means that overall there are the following passwords and PIN:

BC Vault encryption is based on the combined entropy of the global PIN (device input) and the global password (PC input). Each encryption step requires both components, and there are currently two encryption:

Global encryption is one level above encryption per wallet. In the event of an attack, the attacker must defeat both layers before the private keys are visible to him.

In the BC Vault, the private keys are not stored in a security chip, but heavily encrypted in the FeRAM. Thanks to FeRAM technology (as opposed to normal Flash), the data is stored securely in the BC Vault without data loss, over 200 years for 35°C or 10 years for 85°C. In addition, the storage cells used in FeRAM can be used for 10 ^ 13 read/writing operations per byte, a significant improvement over the number of read and write operations supported by flash memory.

Each BC Vault contains the private keys of an address with 1 BTC that is encrypted with exactly this scheme. It is intended to show how much trust the developers have in their hardware wallet .

Does bc-vault support monero, wownero, zcash, and piratechain (arrr). I ask as they focus on privacy and would like that support if possible. Thanks in advance.

You mention the disadvantages on BC Vault to be:
no support for mobile devices
no Bluetooth connectivity

Well this are advantages since hardware wallets offering that are vulnerable:
Please check:
https://www.zdnet.com/article/billions-of-devices-vulnerable-to-new-blesa-bluetooth-security-flaw/

The same goes for open source, where scammers and hackers already were selling fake TREZOR clones …

I would like the listing of all cryptos you support. When I tried to click the feature in this tutorial it gave me an error message. I have many more crypto types than you list, so this is a deal breaker if I can’t get the complete list, or can’t add new coins.

Hey John, can you please specify which link doesn’t work? As mentioned in the review you can find all supported coins here: BC Vault cryptocurrencies.

Interested in BC Vault, can I use it for EOS and XBR?

Not compatible to BIP39 seeds.
Privacy alert: It forces you to reuse bitcoin addresses and so it is very dangerous to user and other counterparts. Privacy is an issue here and the ratings above is way too high.
They are good at encryption but they just don’t understand basic principles in bitcoin protocol.
Installing and using it is also not intuitive but that might be my personal issue.

This is what costumers say

It is clear that you are sharing fake news, because you are a Ledger reseller. Bad practice and something I would not expect from someone who has technical knowledge.
Still users tell their real stories/ https://ie.trustpilot.com/review/bc-vault.com 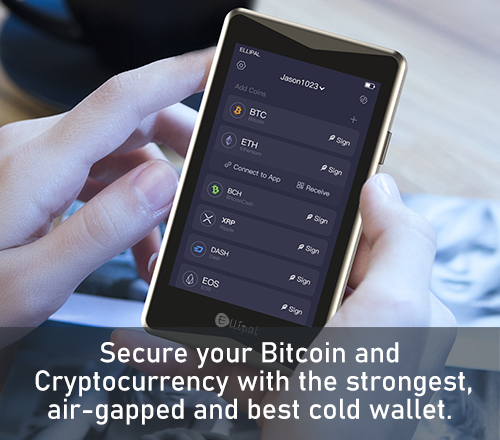 Startseite » Hardware Wallets » BC Vault One