Therefore, the question arises again and again: Which hardware wallet should I choose? I have tested all models extensively and try to help you with this guide to help you decide. If you have any questions about any of the hardware wallets, feel free to leave me a comment.

Quick overview between TREZOR and Ledger

Comparison between Ledger and TREZOR

The quick overview has already shown it: The two hardware wallet brands are quite similar. But there are also some differences, which are highlighted below.

The manufacturer TREZOR launched the first hardware wallet on the market in 2014. It was invented by slush, who is still CEO and IT developer in his company SatoshiLabs. TREZOR is based in Prague in the Czech Republic. You can get the hardware wallet directly from there via the official shop or via one of the resellers.

In the following I will go into the biggest differences between the two hardware wallets from Ledger and TREZOR. Details can be read in the respective test report:

One difference that you already notice when comparing the criteria in the table above is that Ledger does not completely disclose its source code, as confidentiality agreements with chip manufacturers prevent the company from doing so. However, the specifications are completely open and detailed, and all cryptographic operations are deterministic. This will allow any user to check if the hardware wallets are doing what they are supposed to or if there are side channels.

TREZOR’s hardware wallets, on the other hand, are completely open source.

Most hardware wallets offer a password function. Such a password can be any word, string of letters, or even a phrase. You could also think of the passphrase as the 25th word of the recovery seed that is never stored on the device. So a passphrase generates a different wallet.

These settings are useful for having one main account and two or more hidden accounts from the same wallet, with the same 24 word recovery seed. Thus, even if you are in possession of the recovery seed, you cannot access the corresponding wallet without the password. Therefore, this feature is also suitable in case of blackmail by giving out a false password that unlocks a less important hidden account.

However, the TREZOR One and Ledger Nano S differed slightly in this advanced security feature. 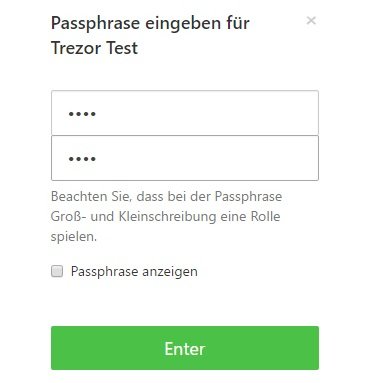 Because with TREZOR , this password is entered via the keyboard of the PC to which the wallet is connected. This makes it possible for attackers to read it out. With Ledger, on the other hand, the password is linked to another PIN, which you then type in using the normal keys.

In principle, the first two models rely on the same input and output options: Two buttons and a small screen.

The design of the Ledger Nano S is a little better for attaching to a keychain, though, and it looks more like a USB flash drive – though you’ll need two hands to operate it here. The TREZOR One can be easily operated with one hand. But with this wallet, less device interaction is required anyway, as more input is taken from the controller.

However, things diverge a bit when it comes to the successor models. While the Ledger Nano X still relies on a small display with two buttons, the TREZOR Model T has a relatively large touchscreen with color display. But thanks to a rechargeable battery, the Ledger Nano X can also be used on the go via a Bluetooth connection with a smartphone.

At first glance, the hardware wallets from Ledger and TREZOR don’t seem very different. But a close comparison of the two brands has shown that there are very real differences.

I personally prefer Ledger’s hardware wallets, even though the difference isn’t really that big and both offer great security.

Which hardware wallet did you choose? Feel free to leave your thoughts in the comments.

Hi, folks would like the communities feedback. I was finally thinking about moving over to a hardware wallet. I was considering ledger nano then i read they don’t have open source software. So my concerns is this. How can ledger be safe when the software is not open source? The developers may have a back door. One day when the crypto market is worth trillions decide to use that door steal everyone’s coins. You will never get your money back the company will blame a rogue employee who may go to jail . You will never get the coins back and the people involved will get rich. Trezos is open source the community checks the software so is safer than ledger. If ledger had nothing to hide they would have made it open source. Does anyone else have these concerns?

I don’t know the answer but was ripped off thousands off my Nano S– there are too many phishing websites. I found out December 10th and contacted them then. They still haven’t gotten back to me. I wouldn’t do Nano Ledgers again just because of this.

which one has less transaction fees? “Trezor One” or “Ledger Nano S”?
and so is there any differences about blockchain or exchange networks that they used (made effects on fees)??

I am not too sure about Trezor One, When I tried to send $20 of bitcoin from Nano S, it charged me $14 for that transaction. That is almost 50%. Not too sure whether they will increase the fee if I transfer a larger amount. But if you tried to send small amount of Bitcoin. Nano is definitely a NO.

Hi, how was your crypto taken from the ledger? Trying to consider how to prevent that.